When it comes to Information Security, even the tiniest looking program could be a time bomb waiting to receive commands from an attacker to initiate a deadly attack on your system. The program could turn out to be a simple backdoor that initiates a connection to the attackers network waiting to receive commands and also to be able to steal information.

In one sentence, a backdoor is a piece of software that gives someone remote access to a computer, usually without the right permission when installed on the computer. The main purpose of a backdoor is to send and receive data, mostly commands, through a network system to and fro.

The attacker installs an innocent-seeming malicious program that could be a simple software or game. Once the user opens the program, the backdoor code hidden in the program could initiate a connection remotely to the attackers network and run any given commands.

It could also daemonize itself and run in the background process, so it doesn’t need you to open the program anymore to initiate a connection.

No matter how security conscious the user is, if someone can trick the user in opening the wrong program, they get to compromise and gain access to the user system remotely.

In this article, we’ll be building a simple backdoor program in Python and show how we can use it to exploit the user system.

Note: This is for educational purposes only, do not use against any person for illegal operations.

To get started, you need to have Python installed and running on your computer. Python is a good choice in this project as it is a high-level powerful programming language, and yes, it is easy and fast to implement as well as supported on all operating systems cross platforms.

If you don’t have Python installed, you can read this article on how to install and set it up on your system.

When building a backdoor, there are two components needed:

To make this work, we’ll be using the Socket module that comes built-in Python. The socket module is used to send data/messages to and fro over a network. In this case, the server will be sending commands (messages), the client receives a message (commands), sends a reply (data) and vice versa.

So we are going to be building two components: client.py and server.py.

Let’s see how to build the first component which is the Client component.

As explained earlier, the client component is responsible for initiating the connection, then waiting for commands from the attacker’s network, running the command and sending back a reply usually output of the command run.

Looking at the above code:

Voila! Our client component is ready.

The server component is responsible for listening for any incoming connection from the client’s component, accepting the connection, sending messages (commands) and receiving data.

Looking at the above code:

Once you have successfully created the two components, we now have a simple backdoor software written with Python.

To test this, you will need to run the two components simultaneously and connected to the same HOST and PORT.

Open two terminals or command line and then run each command on each terminal.

If you see outputs like the one in the image above, then both the server and client are connected and waiting to send and receive messages.

The server is ready to send commands while the client is ready to receive commands, run it and send back its output.

You should see something like the above image. We sent the command echo Hello World which means it should print out Hello World in the terminal. The client receives this command, runs it and sends back a response that is the output of the command. 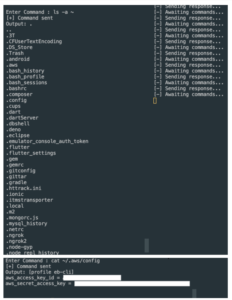 Whoops! You can literally steal the user’s AWS access_key and access_id without their knowledge. Not only that, you can also run dangerous and do all sorts of things with this simple backdoor program.

Protecting Yourself Against Backdoor Attacks

These types of programs are very hard to detect and protect against as they are hidden away from plain sight and control.

There have been a lot of news on how people have been discovering backdoors in different programs for user programs, open source projects and even large software organizations. Backdoors are able to be injected in any kind of programs regardless of the operating system used on.

Backdoors are heavily built on the networking system to initiate remote connection to the attacker as we have seen in the program we built earlier. Most operating systems have firewalls monitoring any unusual and suspicious traffic to and fro. However, sometimes firewalls fail to detect the backdoor due to how backdoors send their network traffic just like how browsers or other apps would connect to the internet.

This reduces the chance of having a software you barely use serving as a backdoor gateway to steal your data.

Also the best way to protect yourself is to not trust any software, as most software is injected with backdoor code without the knowledge of the developers. Some of these applications are injected by some of the packages and dependencies used in building the application.

So have zero-trust for any software.

In this article, we have explained what a backdoor is, how innocent-looking and dangerous it could be and how to build one. These kinds of programs are a big threat because it’s hard to detect them as they’re hidden in a simple program and can look like normal software. Most backdoor programs are bundled as .dll in Windows, or binary or packaged in Python GUI frameworks like Kivy.

Don’t use this to gain unwanted access to any computer without permission because it is illegal. Do not use this program for any illegal reasons even though it’s in its simplest form. 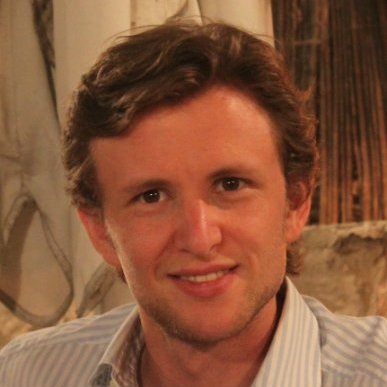 How to Securely Deploy Your Django Application to Heroku

How To Guard Django Application Against Cross-Site Scripting

Code Audit: How to Ensure Compliance for an Application

How to Secure a PHP Based API Using JWT