Linux is probably the operating system most commonly used by security professionals, and also by hackers. It provides a wealth of vulnerability scanning and exploit tools, many of which are available free. The fact that Linux, and many of its security tools, are open source, makes it easy for beginners to get started with penetration testing at low cost.

Because these are the same tools used by attackers in many threat scenarios, they are very valuable for realistic penetration testing.

A popular pentesting and exploit toolkit, which runs on Debian. Offers over 600 tools that support penetration testing, reverse engineering and data forensics. Kali Linux lets you easily customize existing tools or create your own custom tools.

A useful feature is a forensic mode you can enable from the boot menu, which disables network services and freezes the current state of the system, helping you identify vulnerabilities during penetration testing.

A penetration testing platform based on Ubuntu, with a strong open source community. It provides a repository of software that can be useful for pentesters, including latest versions of analysis tools, ethical hacking tools, and system utilities. Its user interface is based on the XFCE desktop.

A Debian-based operating system that enables forensics research and penetration testing, based on the MATE desktop. Can run on 32-bit and 512MB (64-bit) RAM with a minimum of 256MB of RAM. A useful feature of Parrot is its anonymous mode, which automatically routes all traffic through TOR. Parrot also comes with encryption and automation tools.

A pentesting distribution based on Arch Linux. Comes with over 1900 tools for penetration testing and forensic analysis. It provides a live mode feature that enables security assessment of web applications via lightweight Linux desktops like Openbox, dwm, and Awesome.

Warning: You should never perform penetration testing against a target except with permission from the website owner.

Vega includes a vulnerability scanner and proxy for traffic inspection. It has an easy to use graphical UI.

Open Vega, start a new scan, and type the target website URL. You can select which vulnerability assessment modules to use in your scan. When the scan finishes, you can see findings organized by severity, and drill down to see details of vulnerabilities found and remediation recommendations.

ZapProxy, provided by the OWASP project, is another tool you can use to find vulnerabilities in a website.

Open ZapProxy, enter your website URL and perform a scan. ZapProxy is a crawler that investigates the selected URL and other URLs linked from it. When the scan is done, the Alerts panel shows issues discovered and their details.

3. Select the easiest and most severe vulnerabilities

4. Run an exploit with Metasploit

Start the Metasploit Console. Use the search command to find an exploit discovered in the previous steps. Use the following syntax to find exploits—substitute KEYWORD for a topic like Microsoft, SQL, Javascript.

When you find a relevant exploit, use the info command to learn more about the exploit module. Finally, set a configuration for the exploit and run it using the exploit command. See this example from the Kali Linux documentation, which opens a shell to a remote Windows XP system.

5. Run a browser exploit with BeEF

Once BeEF is running in the background, open a browser, it will require authentication. The user and password is beef. You should see the console: 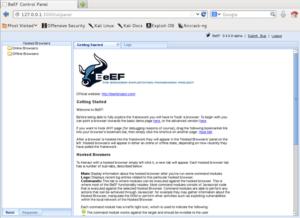 The way BeEF works is to inject a Javascript into a target page, and get the user to view it. The user’s browser is then “hooked”, and BeEF can provide information about the target, and allow you to run attack modules against it.

This is the Javascript code you can use to attack a target browser:

Once you successfully attack a browser, the BeEF Control Panel will show the browser in the  Online Browsers panel. Click a browser to view more information on the target system and launch attack commands.

Linux is a widely used operating system, a favorite amongst IT teams, security experts, and black hat hackers. As an open source operating system, Linux provides great flexibility and enables users to customize the system to their needs. This is, perhaps, why many prefer using Linux-based penetration testing tools. These tools are also offered as open source, and some are continuously updated and maintained by an active community.